Be aware that through me you are not going to gain anything. Through me you can only lose all – because unless you are lost, the divine cannot happen; unless you disap¬pear totally, the real cannot arise. You are the barrier.

And you are so much, so stubbornly much, you are so filled with yourself that nothing can penetrate you. Your doors are closed. When you disappear, when you are not, the doors open. Then you become just like the vast, infinite sky.
That is your nature. That is Tao.

Before I enter into Chuang Tzu’s beautiful parable of The Empty Boat, I would like to tell you one other story, because that will set the trend for this meditation camp which you are entering.

It happened once, in some ancient time, in some unknown country, that a prince suddenly went mad. The king was desperate – the prince was the only son, the only heir to the kingdom. All the magicians were called, miracle makers, medical men were summoned, every effort was made, but in vain. Nobody could help the young prince, he remained mad.The day he went crazy he threw off his clothes, became naked, and started to live under a big table. He thought that he had become a rooster. Ultimately the king had to accept the fact that the prince could not be reclaimed. He had gone insane permanently; all the experts had failed.

But one day, again hope dawned. One sage, a Sufi, a mystic, knocked on the palace door and said, “Give me an opportunity to cure the prince.”

But the king felt suspicious, because this man looked crazy himself, more crazy than the prince. But the mystic said, “Only I can cure him. To cure a madman, a greater madman is needed. And your miracle makers, your medical experts, all have failed because they don’t know the ABC of madness. They have never traveled that path.”

It looked logical, and then the king thought, “There is no harm in it, why not try?” So the opportunity was given to him.

The moment the king said, “Okay, you try,” this mystic threw off his clothes, jumped under the table and crowed like a rooster.

The prince became suspicious, and he said, “Who are you? And what do you think you are doing?”

The old man said, “I am a rooster, more experienced than you. You are nothing, you are just a newcomer, at the most an apprentice.”

The prince said, “Then it is okay if you are also a rooster, but you look like a human being.”

The old man said, “Don’t go by appearances, look at my spirit, at my soul. I am a rooster like you.”

They became friends. They promised each other that they would always live together – and the whole world was against them.

A few days passed. One day the old man suddenly started dressing. He put on his shirt. The prince said, “What are you doing, have you gone crazy, a rooster trying to put on human dress?”

The old man said, “I am just trying to deceive these fools, these human beings. And remember, even if I am dressed, nothing is changed. My roosterness remains, nobody can change it. Just by dressing like a human being do you think I am changed?” The prince had to concede.

A few days afterwards the old man persuaded the prince to dress because winter was coming, and it was becoming so cold.

Then one day suddenly, he ordered food from the palace. The prince became very alert and said, “Wretch, what do you mean? Are you going to eat like those human beings, like them? We are roosters and we have to eat like roosters.”

The old man said, “Nothing makes any difference as far as this rooster is concerned. You can eat anything and you can enjoy everything. You can live like a human being and remain true to your roosterness.”

By and by the old man persuaded the prince to come back to the world of humanity. He became absolutely normal. 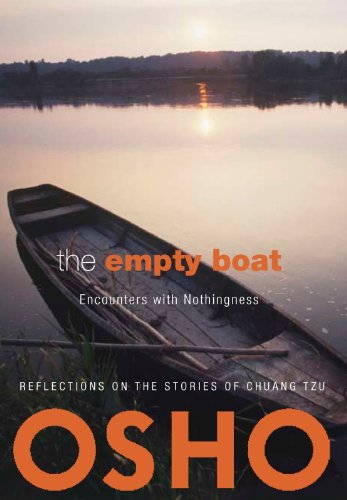