Nelson Mandela: “After becoming president, I once asked some members of my close protection to walk with me around the city, to have lunch in one of its restaurants.

We sat in one of the restaurants in the city centre and all asked for food.”

“After a while the waiter brought us our requests, I noticed that there is someone sitting in front of my table waiting for food”

I then said to one of the soldiers: go ask this person to join us with his food and eat with us.

The soldier went to ask the man. The man brought his food and sat next to me while I asked him and started eating.

His hands were constantly shaking until everyone finished their meal and the man left.

The soldier said to me: The man was apparently very ill. His hands were shaking while he ate!”

“This man was the guard of the prison where I was imprisoned.
“Often, after the torture I suffered, I would scream and ask for some water.

“The same man would come every time and urinated on my head. “
“So I found him frightened, trembling, expecting me to reciprocate, at least in the same way, either by torturing him or by imprisoning him as I am now the President of the State of South Africa.”

“But that’s not my character or part of my ethic.”

Renowned researcher and author Jim Collins makes his second appearance on The Knowledge Project, this time to share a wealth of life lessons learned from his mentor and collaborator, Bill Lazier. Jim recently released BE 2.0 (Beyond Entrepreneurship 2.0), an ambitious upgrade of his first book Beyond Entrepreneurship, co-authored with Lazier and focused on effective leadership style. Shane discusses all new topics with Jim in their follow-up conversation, including what it means to be a mentor and a father, why we should trust by default, why we confuse living a long life with a great life, and the difference between being afraid of risk and being afraid of ambiguity.

But the process of illusion and disillusionment is part of life and goes on endlessly. In the early [19]40s what struck me forcefully was the conflict between my expectations and actual experience. At College I had come to believe that as a graduate I would automatically be at the head, leading my people in all their efforts. In a sense that was true of the majority of the Fort Hare students. Many of them left the lecture room straight to some cosy job, with a steady income and carrying a measure of influence. It is also true that graduates do enjoy the respect of the community especially in the field of education. But my experience was quite different. END_OF_DOCUMENT_TOKEN_TO_BE_REPLACED

Look at how mindful we are of our smartphones. People have little recharging shrines all over their houses, with a cord permanently attached to an outlet right by the door or by the bed. For many of us the first thing we do when we get home is make sure our phone gets recharged. END_OF_DOCUMENT_TOKEN_TO_BE_REPLACED

Observe yourself. That’s why I said earlier that self-observation is such a delightful and extraordinary thing. After a while you don’t have to make any effort, because, as illusions begin to crumble, you begin to know things that cannot be described. It’s called happiness. Everything changes and you become addicted to awareness.
There’s the story of the disciple who went to the master and said, “Could you give me a word of wisdom? Could you tell me something that would guide me through my days?” It was the master’s day of silence, so he picked up a pad. It said, “Awareness.” When the disciple saw it, he said, “This is too brief. Can you expand on it a bit?” So the master took back the pad and wrote, “Awareness, awareness, awareness.” The disciple said, “Yes, but what does it mean?” The master took back the pad and wrote, “Awareness, awareness, awareness means — awareness.”That’s what it is to watch yourself. No one can show you how to do it, because he would be giving you a technique, he would be programming you. But watch yourself. When you talk to someone, are you aware of it or are you simply identifying with it? When you got angry with somebody, were you aware that you were angry or were you simply identifying with your anger? Later, when you had the time, did you study your experience and attempt to understand it? Where did it come from? What brought it on? I don’t know of any other way to awareness. You only change what you understand. What you do not understand and are not aware of, you repress. You don’t change. But when you understand it, it changes.
– Anthony de Mello 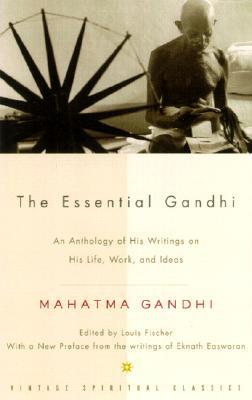 “Gandhi was inevitable. If humanity is to progress, Gandhi is inescapable… We may ignore him at our own risk.”
– Dr. Martin Luther King, Jr.
Mohandas K. Gandhi, called Mahatma (“great soul”), was the father of modern India, but his influence has spread well beyond the subcontinent, and is as important today as it was in the first part of the twentieth century, and during this nation’s own civil rights movement. Taken from Gandhi’s writings throughout his life. The Essential Gandhi introduces us to his thoughts on politics, spirituality, poverty, suffering, love, non-violence, civil disobedience, and his own life. The pieces collected here, with explanatory head-notes by Gandhi biographer Louis Fischer, offer the clearest, most thorough portrait of one of the greatest spiritual leaders the world has known.With a new Preface drawn from the writings of Eknath EaswaranIn the annals of spirituality certain books stand out both for their historical importance and for their continued relevance. The Vintage Spiritual Classics series offers the greatest of these works in authoritative new editions, with specially commissioned essays by noted contemporary commentators. Filled with eloquence and fresh insight, encouragement and solace, Vintage Spiritual Classics are incomparable resources for all readers, who seek a more substantive understanding of mankind’s relation to the divine.

The day that Mandela was released from prison on Robben Island, Bill Clinton, then governor of Arkansas, was watching the news. He quickly called his wife and daughter and said, “You must see this, it is historic.” As Mandela stepped out, Clinton saw a flush of anger on his face as he looked at the people watching; then it disappeared. END_OF_DOCUMENT_TOKEN_TO_BE_REPLACED

“My son starts school today. It is all going to be strange and new to him for a while and I wish you would treat him gently. It is an adventure that might take him across continents. All adventures that probably include wars, tragedy and sorrow. To live this life will require faith, love and courage.  END_OF_DOCUMENT_TOKEN_TO_BE_REPLACED

“I used to be not a follower of Mahatma Gandhi. However, one day I came across his autobiography named My Experiment with Truth in the library. I decided to issue it, just out of curiosity to read something about the father of my nation in his own words. It took me only two days to complete the reading of this book. The book is written in a very lucid language and an average literate person can read it and understand the point that Gandhi wanted to convey. END_OF_DOCUMENT_TOKEN_TO_BE_REPLACED